I am sitting on the big yellow school bus of my youth, now converted into a (still-uncomfortable) medium distance travel vessel mostly for grownups. My groggy two year old snuggles into the crook of my arm while the amiable man seated next to me chats about Noriega and the history of our military in Panama. We are trading languages. My Spanish sounds stuttery and forced next to his smoother English, but I forge on, trying to get some practice in before leaving the people of this country. They have, without exception, been helpful and friendly with our attempts at their language. He is very patient with me. I see a light out of the corner of my eye, and the three of us turn at once and watch the sun finally rise over the mountains of the Chiriqui provence in western Panama. My son raises his hand and waves a sad little goodbye.

I haven’t updated in a bit, mostly because we’ve been busy with new friends, diaper rash, lice and an early departure.

We were all set to stay in Panama for six months, but our plans were thwarted by a couple of things. I’ll get to that in a minute. In keeping with the spirit of our mission (2 kids – ***NO itinerary*****), we have adjusted, changed routes, and redeployed. I can’t stress how important it is to be flexible on a long trip with kids because I’m here to tell you…travels with kids can be wonderful and/or terrible, but NEVER predictable.

Boquete was a wonderful little town. It was picturesque, quaint, cozy and filled with some of the nicest people I had met anywhere in my life. It was no mystery to me why so many expats from around the world were flocking there and making it their new home. The temperatures were just about perfect. According to the thermometer on our very accurate and high tech living room dehumidifier, it stayed between 72 and 78 in our un-airconditioned little abode the entire month we were there. The Spanish language school was top notch, rental prices were still quite affordable, taxis were cheap and safe, and the restaurant scene was decent. There were clubs and groups for just about any interest you might have – community theater, gardening, cooking, hiking, etc.

We were also very lucky to stumble upon a group of parents who, like us, have young children in town. It’s not everyday that you meet people while traveling and say to yourself, “These are OUR kind of people!” But we did, and we enjoyed the heck out of them for the short time we had. Playdates, lunches, backyard BBQs, and dance classes were savored during the last week.

So why did we leave?

First, we intended for our daughter to attend a local private school on the outskirts of town for the remaining five months after a month of Spanish studies at the language school. Our plan was for her to get some solid skills and practice under her belt and then move on to an environment where she could play and converse with kids her own age, hopefully learning language in a more natural kid-friendly manner. She absolutely loves school and did even better than I expected in her Spanish classes. Too bad at $1000 a month we couldn’t afford to keep her at the language school for any longer. Last week, I was pleased to watch her as she had a short but meaningful conversation with our favorite veggie vendor. She was able to answer and understand just about everything!

Unfortunately, my attempts at contacting this private school failed completely. I called them everyday for three weeks, sent them emails and whatsapp messages all to no avail. No one ever answered or responded to my messages. (If you are listening Academia Internacional de Boquete – please get yourselves a secretary!). Since the school was quite a ways out of town (children are bused there from here), I felt a little uncertain about dropping in. As time went on, I felt quite uncomfortable about sending my daughter to a place that I was unable to communicate with. So, there went that idea.

My son loved his little preschool that he attended. The teachers were very friendly and overall, I felt like it would work out for the short time we would be there. But then he came down with some tummy troubles, which lead to the “diaper rash that would not go away”. I kept him home to deal with all of that, and when we sent him back again several days later, he returned home with lice.

All of this could have happened at any preschool anywhere, but dealing with all of that when you are squeezed into a small one bedroom apartment with two kids and one bathroom was…AWFUL.

I would like to give a little unsolicited advice here. If your 2 year old son with adorable curly hair ever comes down with lice, please do yourself a favor and do not attempt to use that tiny little lice comb to very carefully remove any little creepy crawlies after soaking every last hair in conditioner. Your previously adorable child will quickly turn into an angry greased pig. Please, take your husband’s advice and shave his head immediately, because you are likely to lose any remaining shred of sanity you have trying to get him to sit still for more than 15 seconds in a spot with decent lighting, and no one wants to watch a middle-aged mom wrestle desperately with her slippery toddler.

So, that is how we ended up with this awesome hair cut.

My husband enjoyed his language studies for about 2 weeks. He felt like he was learning a lot, and I could tell that his Spanish was improving by leaps and bounds.

Then he hit the wall.

I believe that maybe it had something to do with spending the last 4 years of life sitting through classes at the University and proving that returning adult students really ARE the best students, but whatever the reason, he reached a point where he no longer could stomach 4 hours of intensive studies and homework every night. I have back problems which make it quite impossible to sit for more than an hour or so at a time, so I was holding out for the shorter, more casual (and cheaper) conversational classes which begin in the fall. That was going to mean a long summer with both kids at home, leading into a much rainier fall season, with both kids at home, in a small apartment, with both kids at home….

Well, even the quaintest of towns can begin to feel like something out of a Stephen King movie when you are trapped with bored kids and frazzled parents.

Boquete also had begun to feel a bit like an obstacle course. Our apartment was situated about a 20 minute walk uphill from town. Normally for this family of frequent walkers, this wouldn’t be a problem. However, the road could be treacherous and the sidewalks are not always stroller friendly. My daughter felt this need to try and balance like an amateur tight-rope walker on every curb and rock all the way into town. Why 8 year old children cannot just walk in a straight line like normal people, I will never know, but yelling in alarm every time she struck a karate-kid pose on a tiny little rock, balanced on the edge of a street filled with speeding buses and taxis led me to just give up and hail a cab every time we had to walk into town with her. $2 taxi rides started to add up for every quick jaunt down the hill and back up again for groceries, lunch, rum, language school and whatnot.

But mostly, we left because the travel bug had bitten. We had spent months, years even, planning for this trip. I was itching to keep going, keep moving, seek out new places to explore. I could ignore the itchiness if I was busy, but in Boquete, I was never quite busy enough. The itch began to grow and consume my thoughts.

I asked my daughter the other morning how she would feel about moving on to someplace new earlier than we had planned. She shrugged her shoulders in the nonchalant way that kids do and said, “Panama looked so shocking when we first got here Mom, but now it just looks normal. I’m excited to see what the next place looks like!”

And in that moment I felt a mixture of relief and excitement, because I knew – she had inherited the same travel bug that bites the rest of us. 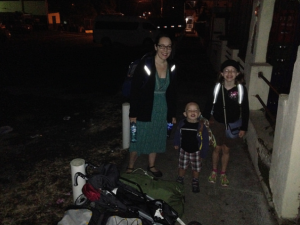 Leave a Reply to The Wife of Bath Cancel reply

The world is our playground!

Cultural travel on a budget

Our travel words and pictures

Family travels around a small planet

Books and Writing | News and Resources

baby and a backpack

lugging our little lady around the globe

A family changes latitudes and attitudes.